This article is based on Gary Eller’s phone interview of Sam Bush on January 29, 2019.
“It was a life-changing experience,” said Sam Bush. The first of his four trips (1966—1969) to the National Old Time Fiddle Contest in Weiser, Idaho, was also the first travel without parents for the fourteen-year-old mandolin and fiddle whiz kid from Bowling Green, Kentucky. In the long drive across America, Sammie (as he then was known) rode with Kentucky fiddlers Lonnie Peerce--founder of the seminal “newgrass” band Bluegrass Alliance--and Bud Meredith.  They were accompanied by family friend Mac Gibson, who ran the Dixie Country Music Jamboree in Cave City, Kentucky, not far from young Sammie’s home. The adults on the trip had gone to Weiser the previous year and Lonnie had competed.

On the first night of the long drive from Kentucky to Idaho, they stopped at the home of Missouri fiddle legend, Cleo Persinger, who had won the Weiser Fiddle Contest in 1964.  Cleo’s first-place title was taken in 1965 by a young Oklahoman, Byron Berline, who would go on to become American’s most recorded professional fiddler. The Kentuckians spent the night at the Persinger’s home and fiddled into the wee hours. Continuing on the next day, Sammie spent his first night in a motel and first saw the Great Plains, Rocky Mountains, and even a jackalope!

When Sam arrived at Weiser, an unimaginable musical wonderland opened up. Sam fondly recalled that there were fiddling heroes such as Clark Kessinger and Byron Berline to listen to, compete against, and become friends and jam with—all night long! There were fiddlers everywhere, including some his own age to hang out and bond with, such as locals Dougie Jenkins, Ruey Frisbee, and Rickie Youngblood. He experienced his first all-night jam at the Washington Hotel, where the Kentuckians stayed. It was a heady experience for a kid who knew few fiddlers at home and, for the first time, had the freedom to explore without parents around him. To this day, Weiser old-timers remember that youngster from Kentucky and his hot pickin’ on both fiddle and mandolin.

Sam recalled that, while contestants competed seriously, playing music in Weiser was always much more about the fantastic jamming and camaraderie than the competition. He became a close hangout buddie with Dougie Jenkins, who was his age; he became a pen pal with his fiddle hero Byron Berline, whose fiddling on an early Dillards LP record had inspired him; and he became friends with Seattle musicians Phil and Vivian Williams, Iowa banjo player Bob Lederly, and powerful North Carolina rhythm guitarist Gene Meade, who backed up West Virginia fiddler icon Clark Kessinger. And, in Sammie’s words, he “became very sweet on” Ruey Frisbee’s fiddling sister, Faye. Also, Sammie laid eyes on the first professional-level mandolin he had ever seen--a Lloyd Loar F-5 Gibson,
with the same manufacture date, to the day, as Bill Monroe's famous mandolin.

When asked whether he remembered any funny incidents at Weiser, Sam immediately recalled the time Ruey Frisbee bought a bottle of coke and tried to take a swallow but had trouble getting liquid out of the bottle. Looking closely at the bottle, they found a mouse inside! And Sam remembered when he was in a jam session with Lou Berline, father of Byron, and was having trouble tuning his mandolin. Lou turned to Sam and said, “Are you gonna play or just twist them goddam knobs?” Sam also recalled a simmering controversy at the Weiser contest about whether professional fiddlers, such as Californian Big Jim DeNoon, should be allowed to compete. The matter was settled in Sam’s mind when someone asked if anybody had ever met a fiddler who made a living playing “old time fiddling,” which was the theme of the contest.

Back in Kentucky after his last Weiser trip in 1969, Sammie formed the short-lived but influential band Poor Richard’s Almanac with his musical mentor Wayne Stewart and a hot young Oklahoma banjo player named Alan Munde. In the mid-1960s in central Kentucky, Lonnie Peerce had formed the legendary Bluegrass Alliance, arguably the first “newgrass” band. Sam joined the Alliance first as a guitar player and then moved to mandolin when Dan Crary joined the band. Other notable pickers associated with the Alliance included Chuck Nation, Hoot Hester, Courtney Johnson, and Vince Gill.

Sam recalled another drive across the country in a Volkswagen van with Alan Munde and Wayne Stewart of Poor Richard’s Almanac to play at one of the first Pacific Northwest bluegrass festivals, organized by Duane Boyer at Eastern Oregon College in La Grande. On the way to the La Grande, Sam and Alan sometimes were unsure exactly where they were and would ask for directions. As a result, Sam and Alan Munde wrote the song, “The Other Side of Baker,” which later appeared on a Poor Richard’s Almanac album. On separate trip, he also played gigs in Seattle with Phil and Vivian Williams’ Tall Timber bluegrass band.

In the mid-1960s, five-time National Old Time Fiddle Contest champion Loyd Wanzer formed American Heritage Music Corporation in his hometown of Caldwell, Idaho. American Heritage was set up primarily to record, produce, and distribute recordings of the Weiser fiddle competition and its fiddlers. As a result of Sam’s Weiser connections, in 1971, American Heritage released two Bluegrass Alliance band albums, a guitar album by Dan Crary, and a fiddle album by Lonnie Peerce. The actual recordings were made in the East and it is unknown where the LPs were pressed. It is likely that American Heritage was Idaho’s first record company. Sam recalled that Bluegrass Alliance worked with American Heritage because their albums were turned down by Nashville-based Uncle Jim O’Neal at his well-established Rural Rhythm Records company. O’Neal didn’t believe teenagers could play that well and believed that the youngsters were frauds. 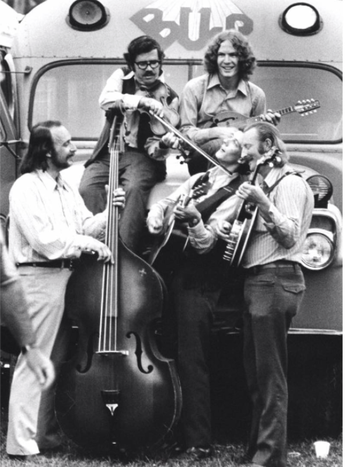 Unattributed internet photo
from pinterest:
https://www.pinterest.com/pin/528610075002981070/?lp=true
Late in 1971, the Bluegrass Alliance disbanded and the legendary Newgrass Revival band formed with Sam as one of the initial members and, later, a classic member. The Newgrass Revival set the standard for progressive bluegrass music and energized the genre for about eighteen years. The energy continues today, three decades later, as the classic band members went on to establish legendary careers of their own.
Since its inception in 1963, The National Old Time Fiddle contest has been a springboard to long, successful musical careers for many youngsters—none more so than Sammie Bush. Magic happens in Weiser every year—young fiddlers bring prodigious talent and energy to Weiser and the contest, but they take away far more than memories of the competition. They take away cherished, lifelong friendships developed at the amazing jam scene at campgrounds, hotels, and businesses around Weiser. Most agree—this is the real wonder of “Fiddle Week.” ​