By Charlie Simmons
Before there was an Idaho B luegrass Association, some of us would get together and jam at various locations. We would play with the Idaho Old Time Fiddlers at their playouts and jams. I think that is where I first met Mike and Donna Bond. They were new from California and had bluegrass experience playing banjo, guitar, and bass. For years, we called Mike the Father of Idaho Bluegrass. Among the places we played was the Eagle Fire Station. It was here I first played with Chris Work. I had met him earlier when my band was playing at the Big Pine Tavern (now The Dutch Goose). We also played at Marion and Mary Moore’s home and at another couple’s home at Shady Acres. I don’t recall their names, but the lady found us a place to play at the Liberty Grange Hall on the highway towards Emmett. It had a stage with a kitchen behind. We had a small P. A. with two mikes furnished by Don Brown. We had a pretty good following by then of family and friends. It was a lot of fun and the rent for the hall was twenty-five dollars. We would pass the hat and always got more than enough. The participants including the Moore’s – Marion, Mary, Gary, and Steve. Others were Mike and Donna Bond, Stan Coleman, Don Brown and family, Mark Thomas, Charlie Burry, Pat Gibson, Bob Hickish, Pat Markham, Shorty Bassett, and others I don’t remember.
We started meeting at the Newman Center on the BSU campus. By this time, we were joined by Joe Smith, Paul Morgan, Glen Garrett, Howard Wright, Adele Thompson, Randy Glenn, and others. Joe Smith was from West Virginia and worked for Boise Cascade. He had the perfect high tenor bluegrass voice. He could part your hair at fifty paces. He pushed us hard to start an organization. Under his guidance and Joyce Marker’s efforts, the Idaho Bluegrass Association was born as an incorporated non-profit association.
First Idaho Bluegrass Assoc.Performance Julia Davis Park 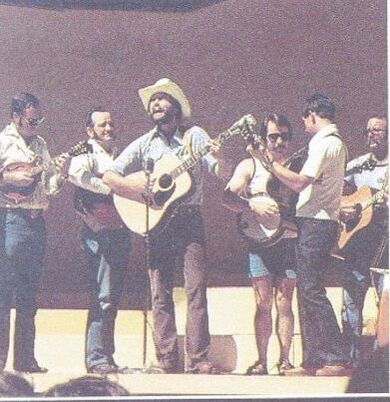 Left to right Charley Simmons Joe Smith Glen Garrett Mike Bond Randy Glen Paul Morgan
Our first performance was at Julia Davis Park for a breakfast. I think it was Fourth of July 1979, with Joe Smith, Mike Bond, Paul Morgan, Glen Garrett, Randy Glenn and myself. KBOI interviewed us and filmed us playing at the Newman Center. I probably have a copy of the video somewhere.
I think I first met Glen Garrett and Randy Glenn at the Fairgrounds. Spectra Productions put on their idea of a bluegrass festival and had several bands. One band was Rocky Mountain Ozone, Bruce Alkire’s band. I especially remember Jeannie Powell. She was a gorgeous young lady who wore a white jump suit and played terrific fiddle. Other bands included the Boise bluegrass band Ragged but Right and an electric band. I was asked to put together a band, which would include Stan Coleman, John Sankey, Paul Morgan, Charlie Burry, Randy Glenn, and whoever else was there with an instrument and in another band. The headliner was an amazing swing fiddler who played a couple of sets. His name was Cecil Johnson, the brother of Herman Johnson, the multiple time winner of the National Old Time Fiddler’s Contest. Jamming behind the stage, I met Glen Garrett and Randy Glenn. Randy was stationed at Mountain Home Air Force Base and was playing an old plectrum banjo, for which he’d made a five-string neck. I didn’t know until later what a great guitar player he was.
Then we moved our meeting and jam location to the Boise Senior Center. First officers of the Idaho Bluegrass Association were Glen Garrett(president), Adele Thompson(Vice President), Mike Bond(Editor), Joyce Marker(Treasurer). Other early officers were President(Randy Glenn, Dee Smith, Charley Simmons, Bill Bernard, Ron Outen, and Keith Friedman) and Editor(Howard Wright). We later combined the Editor and Treasurer positions.
I don’t think the Idaho Bluegrass Association would have happened without Joe Smith. I remember when he was playing at the South Fork Lodge in Lowman. Mark Thomas changed the spelling of his name on the marquee to Ejos Mithe. We called him Joe Ejos for a while. Joyce Marker wrote up our bylaws. She made her own banjo and did beautiful inlays from an abalone shell. Other early members were Tianna Glenn, Gary Mitchell, Charlie Kinder, Les Taylor, Bob Calahan, Dewayne and Cora Bingham, and Michael Baines. My apologies go to the many people I didn’t mention or misspelled their names.
I’ve planned on writing this article for years and should have when my memory was better. I’m happy the Association is alive and well with wonderful and talented members. Joe Gobel and Petra Schwarthoff now are doing a great job. My thanks go to Bruce George for keeping the group together.
We used to organize concerts with various national-level artists including the Bluegrass Cardinals, Ralph Stanley, Laurie Lewis, Robin and Linda Williams, and others. More will follow later on this topic. Also, I will write an article about early bluegrass bands in Idaho.