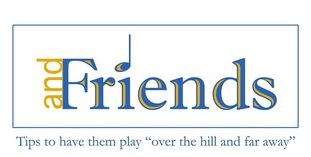 and Friends - Boise, ID
https://www.facebook.com/andFriendsBoise/
Music group doing bluegrass, country and gospel music. Features Daryl on guitar, Aaron with his fiddles, Janice with guitar and vocals, and Carla on bass, Gib with Banjo and guitar and the occasional accompaniment of guests.

www.facebook.com/BackwoodRamblers/
​
A Boise bluegrass band that also loves to play old-time and blues. We've been playing locally for 6 years now at the Boise, Capitol City, and Eagle Public Markets during the summer; plus occasionally at Coffee Studio in Meridian.
Jason Young (on Banjo and guitar) and Hannah Young (mandolin and fiddle) are joined by Dennis Cooper on harmonica, David Gerthung on Mandolin, and Jay Fromlath on Bass. 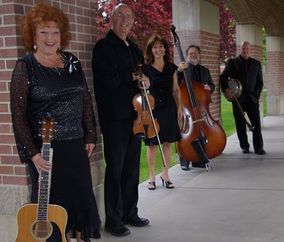 Their music has taken them from obscure churches in the Ozark Mountains to Branson, Mo., where they played four shows a day in Silver Dollar City for three consecutive years. Now in Idaho they also performed locally for assisted living centers, seniors, churches and prisons and are “Still Goin’ Strong.” (the title of the group’s latest CD).
The group consists of Betty Adams, Kent Craig, Bill Cates, Lorinda Yamamoto Norton and Harry Strang. 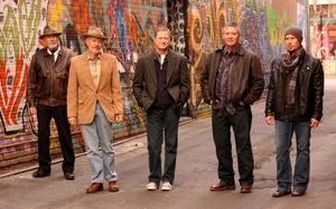 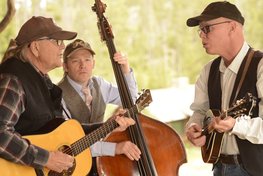 http://deweypicketteandhowe.com/
Dewey, Pickette, and Howe have been dazzling bluegrass and non-bluegrass audiences with their tightly crafted arrangements, airtight harmonies, and superb musicianship. The electrifying blend of traditional, contemporary, and newgrass (not to mention a little Paul Simon or Tom Waits) in a Dewey, Pickette, and Howe performance is sure to get folks movin’ their feet! 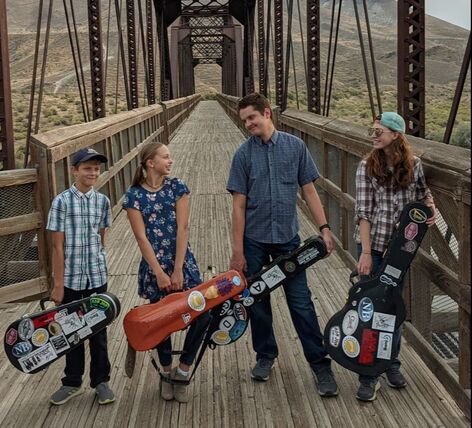 Fiddle Express - Melba, ID
https://fiddleexpress.com/
​
Nine instruments, six members, countless state and national championships, make the family band of Fiddle Express. The Beck family starts them young - at age 3 - in contest fiddling and classical training of the violin.  Fiddle Express enjoys sharing their music with retirements communities, centennial birthday parties, church functions, Bluegrass festivals and busking on the market streets. The Becks currently reside in Melba, Idaho. Their members include: Andrew on Mandolin/Ukulele/Fiddle; Rachel on Vocal/Fiddle; Eliza on Fiddle/Guitar; Isaac on Banjo/Fiddle/Drums.  With Mom and Dad backing up the joy of it all with a Guitar and Double Bass. 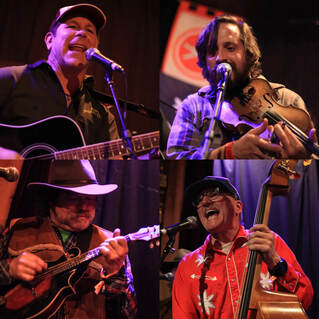 Born out of a desperate need for craft beer, deep powder, plastic jug moonshine, fast-moving rivers, and a deep-seated fear that artificial intelligence will ruin hard-driving bluegrass... High Pine Whiskey Yell came together as a band in 2018 and released its first EP (The Orchard Sessions) in 2019.  Its newest album "Garden City Double-Wide" was released June 2021 and continues to build on the band's Idaho roots.
This four-piece group of modern-day rounders focuses on telling true stories about robots taking your job, banksters robbing from the poor, the trials of gold panning in Idaho, skiing/riding deep powder, UFOs, and a few other traditional bluegrass subjects (such as murder, drinking, and dogs).
Bringing experience from a multitude of projects, this Idaho string band is sure to win you over with its take on bluegrass and the Americana tradition. Its members have played in numerous bands and projects throughout the years incorporating those experiences into Idaho storytelling that is High Pine Whiskey Yell.  Providing support for groups such as The Lil Smokies, Pixie and the Party Grass Boys, Laney Lou and the Bird Dogs, Boot Juice and numerous others... these fellas know how to bring the party.
Scotty Tyler's mandolin playing is aggressive enough to land an Idaho brown trout, yet soothing enough pacify a wookie in a festival hammock. Austin Clark's wielding of the fiddle is nothing short of broadsword-esque and captures the true essence of the fiddle's spirit animal (jaguar-rattlesnake). Brian Carrington guitar flat-picking could woo even the most elusive of sasquatches out of the woods. And Chad Lamer's upright bass playing... well let's just say they sometimes give him water, beer, and let him ride inside the truck.
With all that in mind... if you like having a damn good time... then High Pine Whiskey Yell is your new band!
Contact: highpinewhiskey@gmail.com or Chad Lamer - (785) 218-4994

Spawned from the Broken Horn jam  in McCall. They play a bluegrass/americana mix, with many original tunes.
​More here:  https://www.facebook.com/jughandlers/ 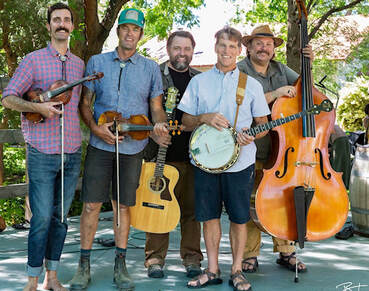 ​Lonesome Jet Boat Ramblers - Boise, ID
​
A bluegrass band with some heavy hitters collected from far flung reaches of this mighty land. Coalesced from the hills of Vermont, the swamps of Florida, the spruce bogs of Alaska, and the pine barrens of New Jersey, the Lonesome Jetboat Ramblers serve up red hot bluegrass and ballads that will make your lip quiver with memories of unrequited love. Featuring Dave McMeekin on banjo and guitar, Willy Dallas on mandolin, Ryan Blizzard on stand-up bass, Steve Baker on guitar and banjo, and the amazing fiddling of Adam Straubinger. 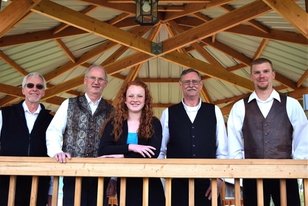 www.northwesthigherground.com/Index.html
Higher Ground is a traditional bluegrass band that plays a blend of Gospel with Bluegrass songs of yesterday and today.  The band has been together since August 2009. We perform at festivals, coffee houses, care centers, and Churches whenever we can. The band consists of Scott Lombard (guitar, vocals), Adam Leavitt (banjo, guitar, vocals), Dave Herzog (mandolin), Denis Hackwith (bass) and Cassidy Arnot. We are all from Lewiston and Clarkston except for Dave who comes from Craigmont ID. More: 509-780-3730 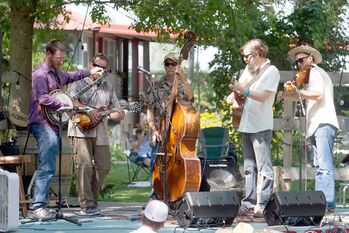 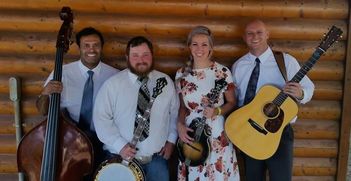 Teton Shadow Band - Rexburg, ID This Idaho bluegrass band consists of a couple guys born and raised in the Mountain West with pretty gals to make them look good. All having a great love for music, you'll hear anything from newgrass to solid traditional bluegrass, not to leave out country, folk, and celtic music styles.
and Nyk and Diane have teamed up as a duo for smaller settings as 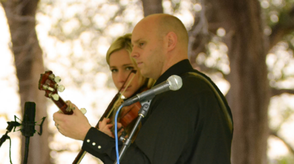 Teton Shadow - Rexburg, ID
www.tetonshadow.com
​​
​ Teton Shadow plays acoustic music covering most genres. Both Nyk and Diane have been playing instruments and singing for over twenty years. Their music foundation is in Folk, Western, Bluegrass, and Celtic music making them appealing to all walks of life.

Turtle Poppers - Boise, ID
https://www.facebook.com/TurtlePopperstheband
Forged in the backyard by mandolinist Adam Engel, guitarist Connor Burke and fiddle player Ethan Mansfield, joined by guitarist Grayson Gable and Bassist Brandon to bring the best of their blended styles to the bluegrass and jam genres. 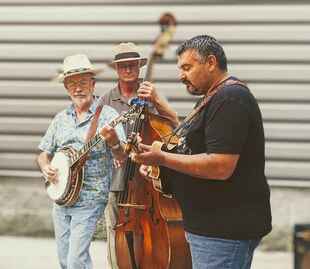 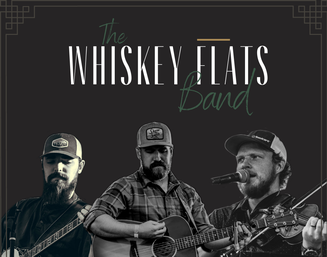 https://www.facebook.com/TheWhiskeyFlats​
​
Whiskey Flats is a country/bluegrass trio formed by Adam Fleck, Nathan Vital, and Nich Riveland. Named a stretch of the old Columbia River that was impassable without dam construction, today it is now known as Cascade Locks 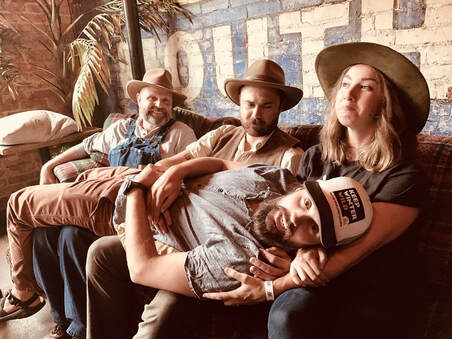 The Aldape Bootstompers are a Boise-based band of bluegrass hounds that were conceived in the mountains outside of Boise. Taking their name from the summit on which they first plucked some strings and got super drunk as they discussed various Americana and bluegrass musicians, the Aldape Bootstompers — composed of Christy Rezaii, Ethan Mansfield, “Mustang Mark” Stolpe, and Connor Jay Liess — play an assortment of Americana music, including bluegrass, folk, indie folk, newgrass, and even a left field pop numbers. We'll play you a sappy love ballad if you ask us nicely, but we prefer the darker numbers, grimy folk steeped in murderin, druggin, whiskey lovin', adulteratin, coffin crackin, boot stompin arrangements. 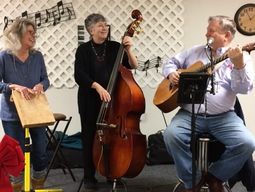 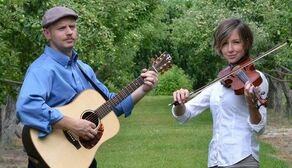 Celtic Shadow plays Irish and Scottish music in pure sense using the Whistle, Fiddle, and Mandolin as their main instruments. Their tight Vocals will have you dancing to the jigs and swaying to the ballads. 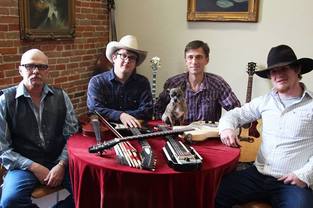 The Country Club - Boise, ID​The Country Club is playing original and traditional music from the front lines of the nostalgia wars. While their sound is clearly drawn from the well of classic country, honky tonk, old time, and bluegrass, it rings and twangs with modernity and occasional urbanity. From dark and dirty to clean and pristine, the sound of the Country Club is as at home on the range, in a barn, as it is downtown, in the club or a bar. 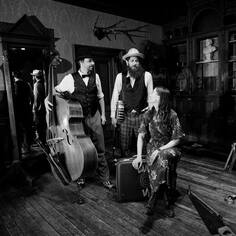 ​Fronted by singer, songwriter and multi-instrumentalist Travis Ward, Hillfolk Noir is a trio of neo-traditionalists playing traditional music on traditional instruments for non-traditional times. They call it Junkerdash, and it’s a sound brewed from folk, bluegrass, punk, string-band blues and other influences musical and otherwise. Recommended pairings: Drinking and dancing. 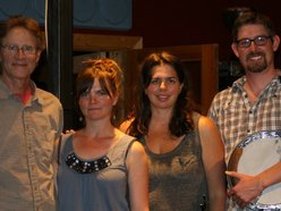 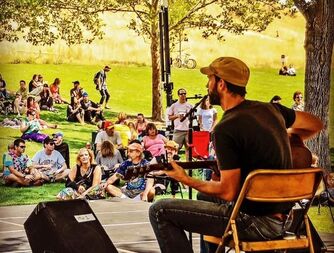 A mix of original songs and traditional Americana
(bluegrass, old-time, early blues and country).
He performs a few times a month solo or with his drummer. 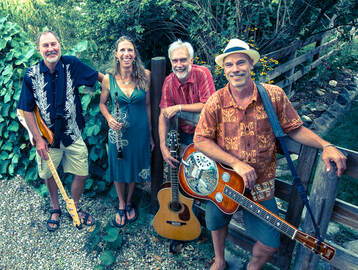 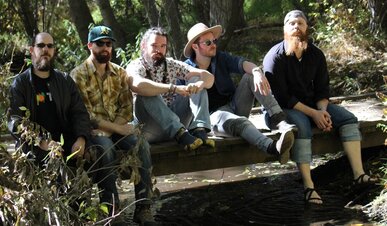 The Trees, the Trees -
https://www.thetreesthetrees.com/

A local Bluesy Folk band with saucy fiddle solos, tight guitar fills, moody, driven piano rhythms, and harmonies that would make the angels weep.
We have been working so hard to get to where we are now and the train just keeps on rolling.