This article is from the Fall/Winter 2014 issue of the National Old Time Fiddler newsletter.
In 1953, the small rural town of Weiser, Idaho held a regional fiddle contest that quickly developed into one of the most important fiddle contests in the world – the National Old Time Fiddle Contest. The contest continues to the present time. Every full third week of June, the population of Weiser doubles, as people come from all over the United States and beyond to compete, renew friendships, jam and listen to great music in many genres. The event attracts some of the finest fiddle players in the world as well as thousands of jammers who form communities of old time, bluegrass, swing and jazz musicians. Hundreds of fiddlers compete in multiple divisions each year. The National Old Time Fiddle Contest organization (NOFC) also certifies fiddle contests in twenty nine states to encourage interest and maintain the integrity of fiddling contests nationwide.
The list of famous fiddle players who have competed at Weiser is daunting. Winners with current national prominence in American acoustic music who return almost every year to Weiser include Megan Lynch, Tristan and Tashina Clarridge and Kimber Ludiker. Subsequent articles will cover these musicians, as well as other notable winners from the 1970s to the present. This article focuses on the decades of the 1950s and 1960s. The table below lists Weiser grand champion fiddlers for these decades.

​Left handed fiddler Loyd Wanzer of nearby Caldwell, Idaho took the grand title in1957, 1959, 1961, 1963 and 1967. Missouri-born California musician Big Jim Denoon won in 1958 and 1960. Big Jim was a prominent west coast musician who played with many of the top names in country and western music, ranging from Spade Cooley and Pee Wee King to George Jones and Merle Haggard. Outstanding Oregon fiddler Bill Yohey won in 1962 and Missouri fiddle legends Cleo Persinger and Cyril Stinnett took grand prizes in 1964 and 1966. Biographies of these wonderful fiddlers are available on the internet and in the book Now That’s a Good Time; Masters of Traditional Missouri Fiddling by Howard Marshal, Vivian Williams and Phil Williams (2008). Oklahoma superfiddler Herman Johnson won in 1968 and 1969, as well as three times in the 1970s. A recent touching tribute by world class fiddler Mark O’Connor appeared in Deep Roots magazine after Herman’s death in 2014. More information on Herman Johnson will appear in the next NOTF newsletter. The backgrounds of the winners in the late 1950s and 1960s show the dominance of fiddlers with midwest roots in this period at Weiser.
In the 1950s and 1960s, great fiddlers also were competing in categories other than the masters division. Famous Texas fiddler Eck Robertson, who is credited with making the first commercial country music recording in 1922, won the senior division in 1962. Renowned West Virginia fiddler Clark Kessinger took the senior title in 1966. Young Sam Bush, later to become famous as the “Father of Newgrass Music”, won the junior division in 1967, 1968 and 1969.
Byron Berline, the fiddler primarily highlighted in this article, won the open title at Weiser in 1965 and 1970. He would become arguably America’s most influential fiddler ever across a vast range of music. Byron was born into a farm family near Caldwell, Kansas on July 6, 1944. His father played fiddle and banjo. By age five, Byron had picked up the fiddle. In 1962, he and his father Lue drove fifteen hundred miles to Weiser where he finished sixth. In 1963, Byron returned to Weiser and finished second. He entered the University of Oklahoma that fall, where he continued to play music while being a member of the football and track teams. There by chance, he made the acquaintance of the hot bluegrass group, The Dillards. This encounter would open musical doors that he could never have imagined.
In 1964, Byron won a national fiddle contest in Missoula and finished fifth at Weiser, primarily because his guitar player had major rhythm problems. The following year, he returned to Weiser and won the top division. Byron finished third in 1966. He did not compete in the next two years but returned in 1969 to serve as a judge. His final competition at Weiser was in 1970, when he again won the grand prize, with his wife Bette (piano) and brother Leonard (guitar) providing accompaniment. This would prove to be the last contest Byron ever entered. He returned in 2010 to judge the Weiser contest.
​In a recent phone interview, Byron remembered his years at Weiser vividly and with great fondness. He recalled free evening shows that were held at the gazebo at the city park for huge crowds and memorable community breakfasts. A lively parade came down the streets and the “Weiser Vigilantes” shot off pistols and made fake arrests of local dignitaries and musicians. Byron recalled not only the contest’s superb fiddlers and substantial prize money, but the great fun of jamming with his competitors and other musicians at the Washington Hotel in downtown Weiser. He also recalled sharing his bag of fiddle tricks with Sam Bush, then a precocious teenager but later to be “The Father of Newgrass Music”.
Byron said that schottische, polkas and hoedowns dominated the Weiser competition when he first came to Weiser in 1963. Texas style fiddling then was not much in evidence. Byron was one of the first to introduce elements of this style to Weiser, a style that would come to dominate in subsequent decades. He recalled notable fiddlers such as Oregonian Bill Yohey and Idahoans Manny Shaw, Duane Youngblood, Jim Widner, Loyd Wanzer and Rue Frisbee. It was through the Weiser contest that Byron’s composition Martin’s Waltz was introduced to the national fiddle community. As many other Weiser champions avow, Byron felt that the overall Weiser experience meant more to him than becoming the national fiddle champion. 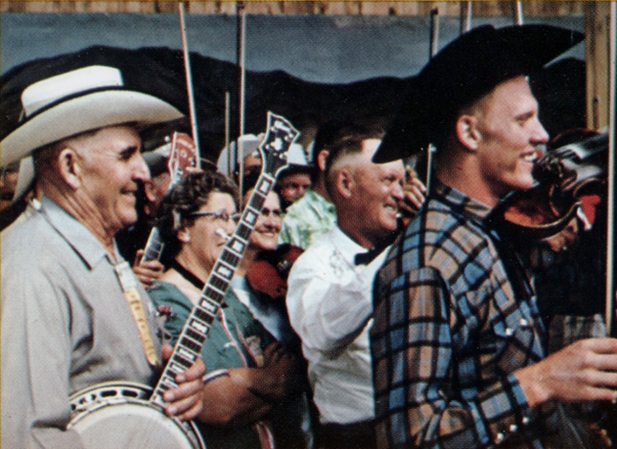 The photo above shows Byron Berline with his father Lue at Weiser, likely in 1964.
In 1965 at the Newport Folk Festival, Byron met Bill Monroe, who offered him a job with the Bluegrass Boys. Byron declined so he could finish his education. He graduated from the University of Oklahoma in 1967 and joined the Bluegrass Boys in March of that year, leaving to go into the U. S. Army in September. In this short period, he recorded three instrumentals with the Bluegrass Boys, including "Gold Rush", destined to become a bluegrass classic, which he cowrote with Monroe. Two years later, Byron was discharged from the service and moved to Southern California, where he remained until 1995. In the twenty six years when he was based in California, Byron achieved international fame as a member of many notable groups, including:

Flying Burrito Brothers                      Berline, Crary and Hickman
California                                              Sundance
Dillard and Clark                                Stephen Stills and Manassas
Country Gazette
Byron also became a much sought session musician, recording with (among others):
​Byron’s fiddle was heard on countless television and film productions and he had acting roles in at least two movies, The Rose and Star Trek: The Next Generation. He also performed bluegrass with symphony orchestras all over the Unite States. Byron compiled a massive recording list, covering the vast musical landscape indicated above. In collaboration with Jane Frost, Byron recently completed his autobiography, A Fiddler’s Diary (2013).
Byron returned to his roots in 1995 when he established the Doublestop Fiddle Shop in Guthrie, Oklahoma. His long time friend and banjo virtuoso John Hickman also moved from California to work at the Doublestop Fiddle Shop. Together they formed the Byron Berline Band, which tours nationally and internationally and frequently performs for folks in Guthrie at Byron’s Music Hall. Byron also founded the highly acclaimed Oklahoma International Bluegrass Festival.
Byron Berline’s presence at Weiser from 1963 to 1970 was highly influential in many respects. He represented a new breed of fiddlers in two respects. He first introduced elements of Texas style fiddling and he was the first grand champion (just shy of twenty years old) who was not a middle age or senior man. His endearing personality still is fondly remembered fifty years after his first trip to Weiser. 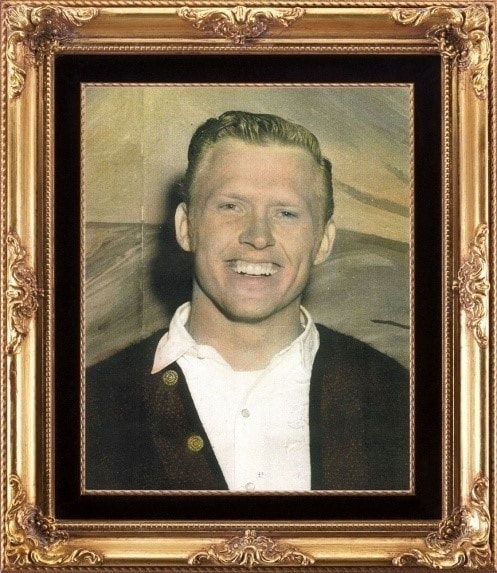